One of the most important acts of Abraham Lincoln’s presidency was his issuance of the Emancipation Proclamation.  It consists of two executive orders  issued September 22, 1862 that declared the freedom of all slaves in any state of the Confederate States of America that did not return to Union control by January 1, 1863 and one  issued January 1, 1863, named the specific states where it applied. Historian Seth Kaller notes that:

"The text reveals the major themes of the Civil War: the importance of slavery to the war effort on both sides; the courting of border states; Lincoln’s hopes that the rebellious states could somehow be convinced to reenter the Union; the role of black soldiers; Constitutional and popular constraints on emancipation; the place of African Americans in the United States, and America’s place in a worldwide movement toward the abolition of slavery. In sounding the death knell for slavery and the “Slave Power,” the president took a decisive stand on the most contentious issue in American history."

In addition to the moral impact of this “sincerely believed…act of justice,” the Proclamation aided the Union cause tangibly and decisively. Because it focused on territory still held by the Confederacy, only small numbers of slaves (compared to the total slave population) were immediately freed. However, the Proclamation deprived the South of essential labor by giving all slaves a reason to escape to Union lines. Failing that, it freed slaves immediately on the Union Army’s occupation of Confederate territory. The Proclamation also encouraged the enlistment of black soldiers, who made a crucial contribution to the Union war effort. Moreover, England and France, which had already abolished slavery, were constrained from supporting the Confederacy, even though doing so would have been in their own economic interests. Lincoln summed up the Proclamation’s importance in 1864: “no human power can subdue this rebellion without using the Emancipation lever as I have done.”

Students and Teachers of US History this is a video of Stanley and Christopher Klos presenting America's Four United Republics Curriculum at the University of Pennsylvania's Wharton School. The December 2015 video was an impromptu capture by a member of the audience of Penn students, professors and guests that numbered about 200. - Click Here for more information

As historian John Hope Franklin wrote, Lincoln’s Proclamation “was a step toward the extension of the ideal of equality about which Jefferson had written” in the Declaration of Independence. And in time, “the greatness of the document dawned upon the nation and the world. Gradually, it took its place with the great documents of human freedom.”

It is important to note that the orders were directed only to the states that seceded from the Union. Slave states that remained with the Union were not affected and slavery remained legal. It would not be until 1865 that the ratified  13th Amendment to the Constitution freed all slaves with this language:  Neither slavery nor involuntary servitude, except as a punishment for crime whereof the party shall have been duly convicted, shall exist within the United States, or any place subject to their jurisdiction. 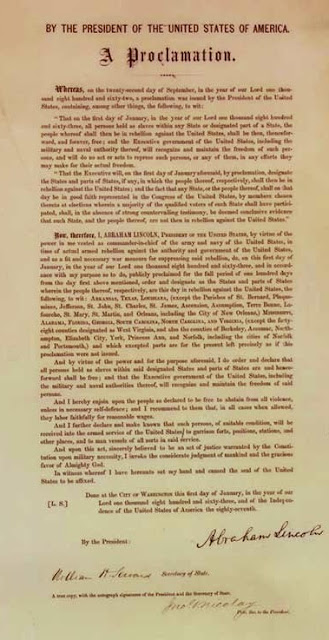 By the President of the United States of America
A Proclamation

Whereas, on the twenty-second day of September, in the year of our Lord one thousand eight hundred and sixty-two, a proclamation was issued by the President of the United States, containing, among other things, the following, to wit:

"That on the first day of January, in the year of our Lord one thousand eight hundred and sixty-three, all persons held as slaves within any State or designated part of a State, the people whereof shall then be in rebellion against the United States, shall be then, thenceforward, and forever free; and the Executive Government of the United States, including the military and naval authority thereof, will recognize and maintain the freedom of such persons, and will do no act or acts to repress such persons, or any of them, in any efforts they may make for their actual freedom.

Now, therefore I, Abraham Lincoln, President of the United States, by virtue of the power in me vested as Commander-in-Chief, of the Army and Navy of the United States in time of actual armed rebellion against the authority and government of the United States, and as a fit and necessary war measure for suppressing said rebellion, do, on this first day of January, in the year of our Lord one thousand eight hundred and sixty-three, and in accordance with my purpose so to do publicly proclaimed for the full period of one hundred days, from the day first above mentioned, order and designate as the States and parts of States wherein the people thereof respectively, are this day in rebellion against the United States, the following, to wit:
Arkansas, Texas, Louisiana, (except the Parishes of St. Bernard, Plaquemines, Jefferson, St. John, St. Charles, St. James Ascension, Assumption, Terrebonne, Lafourche, St. Mary, St. Martin, and Orleans, including the City of New Orleans) Mississippi, Alabama, Florida, Georgia, South Carolina, North Carolina, and Virginia, (except the forty-eight counties designated as West Virginia, and also the counties of Berkley, Accomac, Northampton, Elizabeth City, York, Princess Ann, and Norfolk, including the cities of Norfolk and Portsmouth[)], and which excepted parts, are for the present, left precisely as if this proclamation were not issued.
And by virtue of the power, and for the purpose aforesaid, I do order and declare that all persons held as slaves within said designated States, and parts of States, are, and henceforward shall be free; and that the Executive government of the United States, including the military and naval authorities thereof, will recognize and maintain the freedom of said persons.
And I hereby enjoin upon the people so declared to be free to abstain from all violence, unless in necessary self-defense; and I recommend to them that, in all cases when allowed, they labor faithfully for reasonable wages.
And I further declare and make known, that such persons of suitable condition, will be received into the armed service of the United States to garrison forts, positions, stations, and other places, and to man vessels of all sorts in said service.
And upon this act, sincerely believed to be an act of justice, warranted by the Constitution, upon military necessity, I invoke the considerate judgment of mankind, and the gracious favor of Almighty God.
In witness whereof, I have hereunto set my hand and caused the seal of the United States to be affixed.
Done at the City of Washington, this first day of
January, in the year of our Lord one thousand eight
hundred and sixty three, and of the Independence of the
United States of America the eighty-seventh. 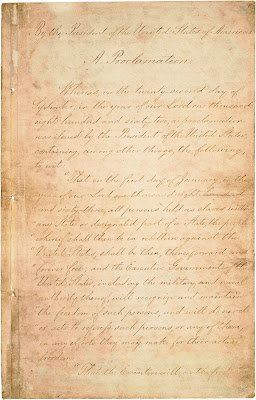 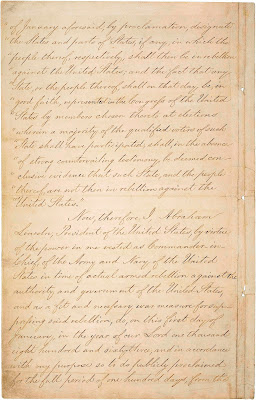 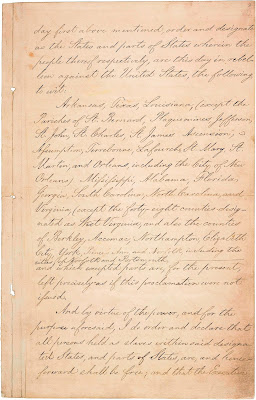 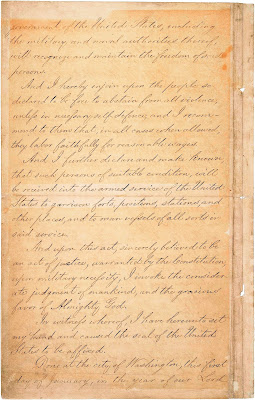 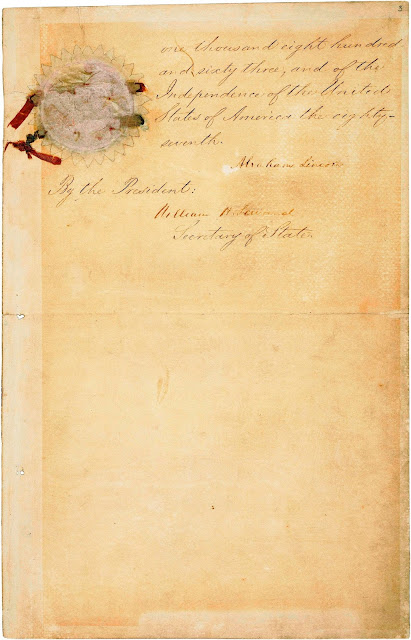 Courtesy of the N.Y State Library 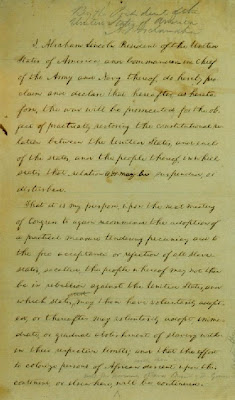 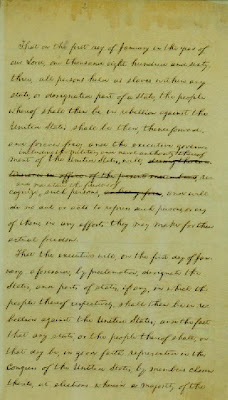 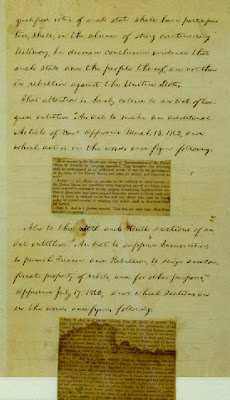 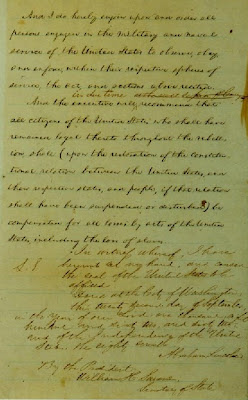 Capitals of the United States and Colonies of America

Book a primary source exhibit and a professional speaker for your next event by contacting Historic.us today. Our Clients include many Fortune 500 companies, associations, non-profits, colleges, universities, national conventions, pr and advertising agencies. As the leading exhibitor of primary sources, many of our clients have benefited from our historic displays that are designed to entertain and educate your target audience. Contact us to learn how you can join our "roster" of satisfied clientele today!

Primary Source exhibits are available for display in your community. The costs range from $1,000 to $35,000 depending on length of time on loan and the rarity of artifacts chosen.

No Taxation Without Representation

US Bill of Rights

*Republican Party - - is a defunct political party organized by Thomas Jefferson and James Madison in 1791. The Party went out of existence over the schism between John Quincy Adams and Andrew Jackson (both Republican candidates) over the Presidential election of 1824. Today, for the sake of expediency, political scientists incorrectly refer to it as the Democratic-Republican Party. Party members throughout its existence never utilized the name “Democratic-Republican.”

*** President of the Confederate States of America